Which Cluster is Suitable for Your Application Workload:MySQL InnoDB Cluster or MySQL NDB Cluster ?

What is difference between InnoDB and NDB storage engine ?
Please have look on this link :- https://dev.mysql.com/doc/refman/5.7/en/mysql-cluster-ndb-innodb-engines.html

So What is differences between MySQL InnoDB Cluster and MySQL NDB Cluster ? 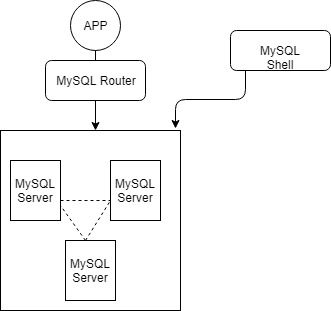 This cluster can run into either single master/primary mode or multi-master mode.
Transaction work flow will be same in both mode of operations.

Let us take an example , Fig-  which is running one Master database(write/read) and two participant database(read slave). all write transactions have to be routed to the master server. Read transactions can go to either to one of the participant servers.
The MySQL Router is an important tool to ensure that transaction coming from app will go on which database node.
when router starts it open two port for application , one port 6446 - Read/Write and another port 6447- Read only.
In this Architecture , it requires application distinguish read transactions from write transactions and it means that an app can only guaranteed to see its own updates if it uses the same master MySQL server all the time.
Also , When app send transaction to group of MySQL server via Router then it uses PAXOS protocol to ensure that participants arrive at the same commit order. The committer has to wait until a majority of participants in the group has received the transaction and couple of rounds to ensure that all nodes comes to same commit derision.

Technically ,InnoDB Cluster provides more read scalability than write scalability.
MySQL NDB Cluster
In this architecture , MySQL Router is not needed for MySQL Cluster although it is possible.

Another differences is with MySQL Cluster , all MySQL Servers see the same data , thus you can send the query to any MySQL Server connected to the cluster. each MySQL can read and update data in the entire cluster.

III. Sharding Differences
MySQL Cluster runs distributed transactions over all shards(=NODE GROUP) and it can run both updating transactions as well as read queries over multiple shards. MySQL InnoDB Cluster don't have same features. application has to solved this sharding technique.

IV. Query Execution Differences
Query Execution in InnoDB Cluster is single threaded where as NDB cluster can push down query condition evaluation to data nodes.These are evaluated in parallel if scans are sent to multiple partitions.In addition cluster can push down joins to the NDB data nodes.
Thus MySQL NDB Cluster can achieve substantial parallelism in the execution of a single query.

MySQL InnoDB Cluster requires three server to handle one node failures
( Formula #  No of Server = 2* No of failures + 1 ). it can't continue to service updates when two nodes have failed out of three since it can't form majority (PAXOS protocol ) in that case.

In MySQL Cluster which nodes are to survive is based on heartbeat protocol , this protocol contains all data nodes in cluster, A surviving set of nodes must have at least one node in each Node Group(== Shard).
In case of 02 data nodes in 01 node group and one of them fails, the surviving node will still be able to continue if it can access the arbitrator(Management Node) and arbitrator accepts its request to form new cluster. if arbitrator fails, cluster will select a new one immediately.

In case of Network partitioning 50/50 situation, MySQL Cluster uses Arbitrator to solve n/w partitioning,  and MySQL InnoDB Cluster use Quorum to solve it but in different way.

In short , MySQL NDB Cluster can still run with 01 replicas in Node Groups where as with MySQL InnoDB Cluster needed 02 replicas to run and accepts transactions.

Also, MySQL NDB Cluster tries to maintain the cluster to be available for insert/update/delete all the time where as InnoDB Cluster it is ok to enter into read-only mode for some time and do mannual intervention to decide which parts that should survive.

Below tables described as summary of differences.

What Clustering Solution to CHOOSE ?

I. Based on Real Time Behavior
MySQL NDB Cluster is designed for predictable response time due to in-memory capabilities. it can provide 100 % of the responses within time limits of down to hundreds of microseconds for demanding telecom and financial applications.

Many of our customers requires 100% of responses of complex transactions to complete within milliseconds this makes it impossible to use a solution based on disk-based storage. thus Innodb cluster has challenged to provide predictable response time.

Both Clustering Solutions uses Asynchronous Replication to wire one cluster DC 1 to another DC 2.

III.Based on Scalability
Both Clustering Solutions scale very well for reads, for write scaling NDB will scale to many (node groups ==shards) without changing the application code.

IV. Based on Storage Engine Feature Set
InnoDB Support Max row size of ~65K bytes where as NDB has limitation of 14K bytes.

InnoDB runs all queries using a single thread that runs inside the MySQL Server. NDB runs queries in a number of threads that corporate and queries are automatically parallelised when more than one partition is used in the query.
NDB supports pushing down joins into the data node where they will execute with some level of parallelism.

I would always recommended to look for limitations/FAQ before you certify for any of those clustering solutions.

MySQL NDB Cluster was originally designed for telecom servers that require constant uptime, it was designed for scalability to a large number of nodes while still maintaining consistency of its data.
There are many areas where MySQL InnoDB Cluster will be beneficial. it will be a more natural alternative for existing Master- slave replication where needed Always-On situation for application workloads.
No doubt , InnoDB has rich set of features than NDB storage engine and more useful for designing general purpose application.

Feel Free to give feedback.

Next , Blog i will talk about how transaction works in NDB Cluster.

About Me : I am Chandan Kumar based Mumbai I am Oracle Certified MySQL Database Engineer,having 10+